I Gots The Valley Swag

So remember that time I tried to guess what would be in The Valley gift bag? Well, when I went to visit the nice folks from The Valley at their sister show Living Dayton, they gave me a gift bag of my very own!

And, just as I feared, no alpaca.

But there was a The Valley notebook, in which I have doodled "I love Ellis" a million times. 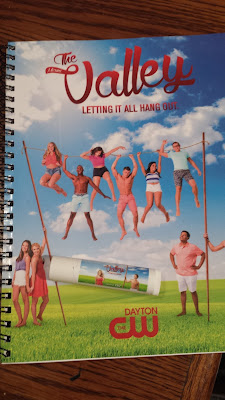 And The Valley CHAPSTICK, which interestingly only includes Alexys and Chris on the side.

Oh, to be a fly on the wall for the meeting about The Valley swag. I can imagine...

Promotional person: OK, so we want to order some promo items for The Valley. How about a t-shirt and a hat? Maybe one of those string backpacks the kids like?

Executive producer Steve Bailey: I want something provocative, something unexpected, something that the cast can use on the show if there's a romance.

Executive producer Steve Bailey: Chapstick. I want chapstick. And if you can't fit everyone on the label, just go with the hottest two people from last season. 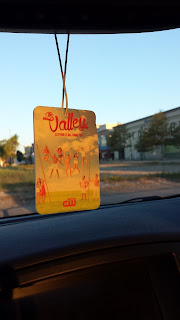 Promotional person: OK. But what should it smell like.

Executive producer Steve Bailey: It should smell like The Valley, of course. Discarded t-shirt coated in Axe Body Spray, with just a note of perfume too expensive for the occasion. 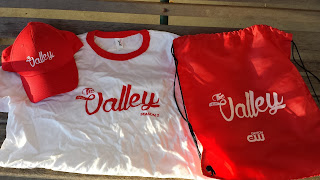 ...anyway, I'm grateful for my swag stuff from The Valley.

Also, a note to those of us who are the olds. Swag doesn't mean promotional giveaways anymore. As Gawker helpfully notes,  swag is like "da bomb," for now. Although I am just noticing that this article is from 2011, so forget it. Swag is dead.