Here on Dayton Valley Talk, we are all about mocking recapping Dayton's most reliably-not-in-Dayton reality show, The Valley, Season 2.

However, we are also open to mocking other Dayton-based shows, including my very own appearance on Living Dayton, Dayton's noontime talk show type program (channel 2, check your local listings). Living Dayton is locally produced for WDTN, which is Dayton's CW sister station, so there is staff overlap, including host Katie Kenney who produces on The Valley. 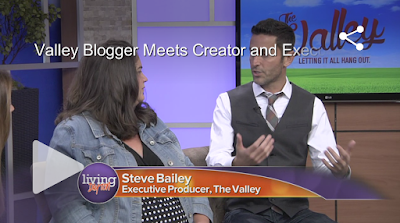 Either the guys/gals from The Valley are good sports OR they also realize the ridiculousness of this show (or both), but they reached out to me via Twitter to say they love this blog. Hi guys/gals of The Valley and the other very nice people of WDTN who love to snicker about the show in your cubes.

Against my better judgement, I agreed to be on the show. I worried,
...would I look like a horse next to under 5 foot, 98 pound Living Dayton host Katie Kenney [answer: yes]
...would I flub up and look like an idiot on live TV [answer: not too shabby]
...would supervising producer Jason Doyle throw me up against a fake brick wall and make me tape a dumb public service announcement [answer: no, but he did make a special trip out of his office to meet me]
...would other people who work on this show give me the stink eye [answer: no, they were very curious about me and friendly]
...is this some sort of trick, like they lured me on to their turf so they could mock ME [answer: no, they even let me ask the executive producer Steve Bailey any question I wanted on LIVE TV]. 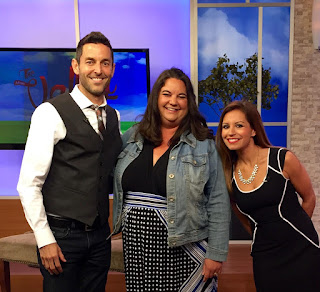 Me (middle) with The Valley executive producer Steve Bailey and host/producer
Katie Kenney (she was late to interview a cat).


One thing I didn't think about ahead of time was that they might be afraid of me. After I arrived at the station, I was pulled aside by some other producer-type person (sorry, there were a lot of names at once) who kept talking about how this was a noon show and that children might be watching. I wasn't following her until someone finally said, "we love your blog so much but we really hope you don't have to say nip slip on this show." Good gravy, think of the children. It dawned on me that they thought I might do a reading from this here irreverent blog.

I was on my best behavior--too nice some of my friends said. Don't worry. I haven't sold out. I will be back at it every Sunday (12 episodes this year, oh boy) to share my recaps of The Valley.

I just might be doing it wearing my new The Valley t-shirt and smacking my lips with The Valley lip balm. That's show business, baby.