The Valley Recap: A Ship Storm of Talent (S2:E3)

Welcome back to Dayton Valley Talk! If you haven't already check out my hilarious recaps of earlier episodes.

The Valley is a Dayton-produced reality show, featuring favorite players from Season 1 and a set of new 18-24 year-olds who are apparently allowed to buy beer for everyone. Everyone has something to prove. So what’s your story?

For this very special houseboat edition of The Valley, please hit play on this awesome song and then scroll down to read more while you disco.

Last episode they told barf stories over lunch and Ally took the girls to tea while the boys got to hang out at the pool.

Poor Nathan, got left off the credits like he was the Professor on Gilligan's Island.

Theme song :  “Do you have what it takes?” To contain Sol's knockers? To survive on a boat with this group? To make up an outfit for the ABC party? To develop any talent at all?

First adventure: Houseboat on Lake Cumberland, Luau party
Noelle and Ally decorate for a luau on the houseboat.

They have a feast of food. I guess craft services is better this season. Chris does some grilling.

Aaron – "Chris has good chicken and I respect that."

They dance. Neither coconuts, nor bathing suit can contain Sol. Ryan/Aaron (sometimes making the effort to decide which is which is too much effort) say stuff about Sol. 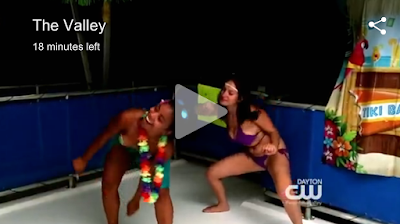 Ryan's reaction: "I don’t know what to expect from that."

Manufactured conflict between Sol and Ryan. They talk like dumb kids but think they have handled it maturely. They hug.

Third adventure: Lake storm
Alexys: "The boat is rockin' and not in a good way."

The rope breaks that ties them to the shore. The guys act manly and tie the rope again. There was teamwork.

Fourth adventure: ABC party
For those of us who are the olds, that means anything but clothes.

Ally answers the question, yes, she looks awesome even in a potato sack. Literally

Sol and Casey wear duct tape. Straight on their skin. 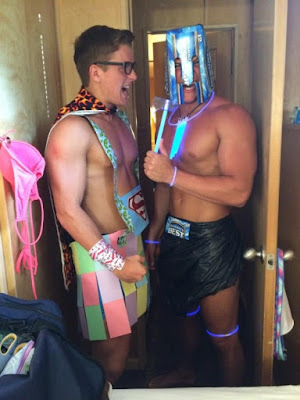 Ellis does an impersonation of each of them as way of introduction.

Noelle does some strange dance while dressed like an Oompa Loompa still.

Aaron doesn’t really have a talent.

Chris dances and licks something and then epically falls.

Sol does not even attempt a talent. Unless maybe it involves a beer bong and gets edited.

They all dance while wearing glow necklaces. 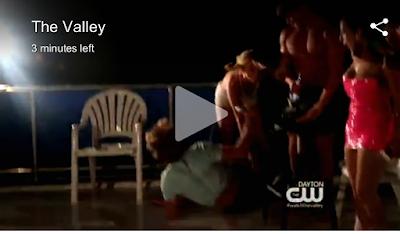 Chris falls on his ass

Next week we hear Ellis has sickle cell, Sol manufactures some more drama and maybe Aaron starts to like Alexys. 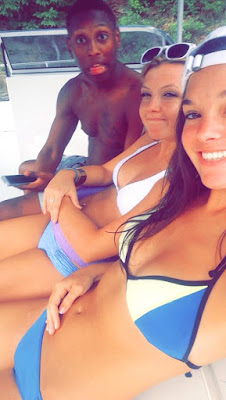 
Rock on with your bad self.
Posted by Holly Michael